Back before everybody’s cell phone had built-in GPS, I had a TomTom GPS. It came with a suction cup so you could stick it to the window, but that never really worked that well for me. It would constantly fall off the window, and it drove me nuts. So, I bought a beanbag friction mount that I could stick it to, and it would sit nicely on the dashboard whenever I was driving somewhere that I needed directions.

Fast forward to present day. I use my cell phone for directions when I need them, but I prop it up in a little groove below my car’s instrument panel. If I turn too fast, it goes flying, and it’s low enough that I’m constantly looking down for the next turn. The solution is a cell phone mount, and I’ve been shopping for the perfect one for a long time.

I didn’t want something that used a suction cup because of my previous bad experience, and I didn’t want something that used an adhesive because I worry about it doing permanent damage or failing over time. The vents in my car are not in a good location, so any clip-on mount’s not so great. I was considering going for a suction cup to re-use with my beanbag, but I was turned off by storing it. I wouldn’t want to leave it out all the time because the rubber could melt on a really hot day, it’s too big to store with the base & mount assembled, and the idea of disassembling & reassembling with each use is less than ideal, too. 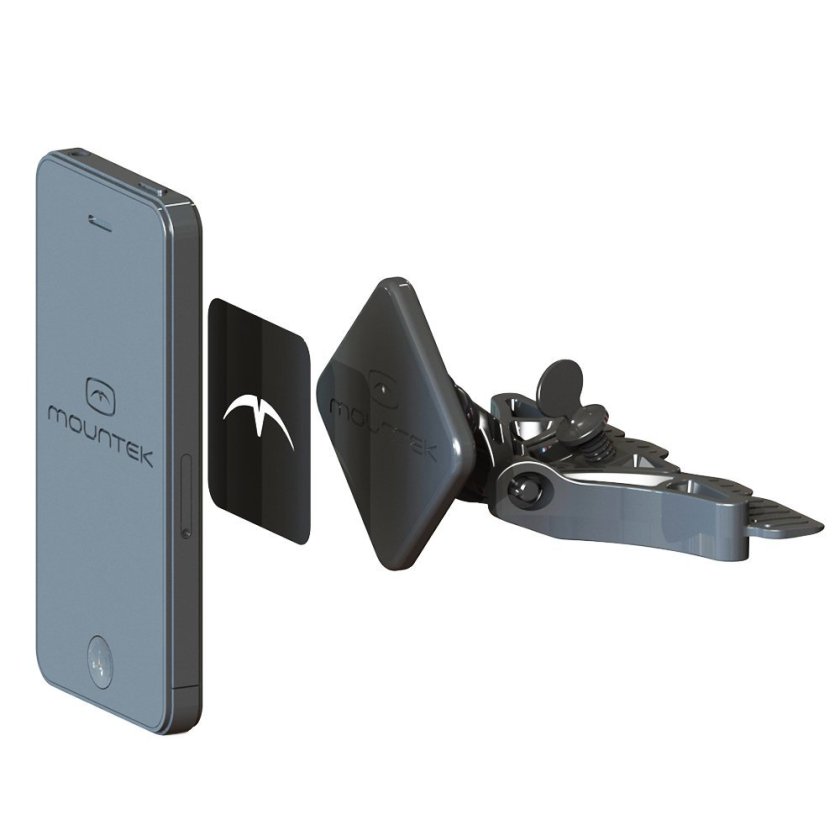 This thing is great. First, it attaches to the CD slot in my car which is perfect. It’s right where I want it in the middle of the instrument panel, and I don’t think I’ll ever put another CD in there, anyway. The mount is small and reasonably unobtrusive, so I won’t have some big, bulky bracket that’s either out all the time or being stored with each use. It’s magnetic, so I just stick a metal badge under my phone’s case and it just sticks–super easy to mount and remove with one hand. There are no brackets, so I can put it in any orientation with whatever cables I might need (charging, stereo). It’s universal, so it’ll work with phones or tablets or anything else that’s light enough to be held by the magnet (which is pretty strong). It can also be used as a desktop stand for your phone, if you’re into that kind of thing, too.

The only thing that I can even think to complain about is that my phone blocks the clock a bit when it’s mounted, but I can still see the time by leaning a little to my left. (So be sure to think about what controls or displays it might be blocking.) Other than that, it’s amazing. Even my wife was impressed, which is really saying something. Best mount ever.

I'm enthusiastic and passionate about creating intuitive, great-looking software. I strive to find the simplest solutions to complex problems, and I embrace agile principles and test-driven development. View all posts by Adam Prescott

I started this blog as a personal searchable repository of things I've learned and figured out. It evolved into a mechanism to facilitate personal growth, and now it's turned into a bit of a hobby. I enjoy writing about software development, my professional life, and related topics.

I love to hear from readers, so please feel encouraged to leave comments on anything you read here.